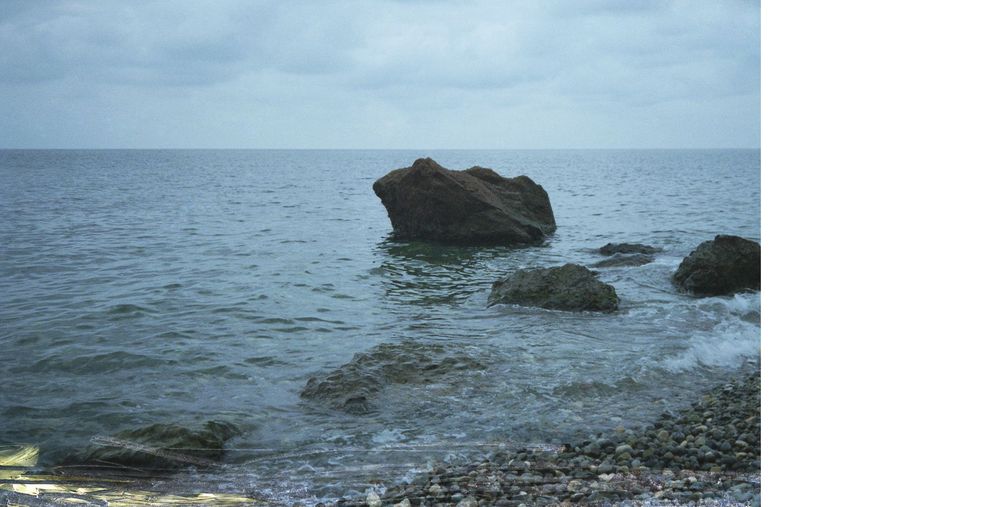 In 2011, Yaroslav Solop went on holiday with a group of friends to the coast of the Crimean Peninsula near Sevastopol. ‘My friends and I spent hours in deserted places,’ he recalls, ‘exploring the sky and rocks, quoting Homer’s Odyssey, picking small pebbles with our hands, sniffing salt air, watching the Black Sea’. Solop took a series of analogue photographs during the trip which he left undeveloped after returning home to Kyiv.

Three years later, in early 2014, Russia annexed Crimea. The dormant images in the rolls of film he had put to one side took on a new significance. They contained glimpses of an irretrievable past and an inaccessible place. It was only then that Solop felt moved to do something with the exposures. The developing chemicals brought these images into view – arcadian visions of waves lapping the shores of the Black Sea, the sun setting over the remains of the ancient Greek colony of Khersones, and sailboats moored in the harbour at Sevastopol. Before printing the negatives, Solop dragged a small paintbrush over them, creating delicate golden lines which snake across the final pictures.

Yaroslav Solop is a Ukrainian artist, curator, photographer and researcher.

He is a co-founder and editor-in-chief of BOOKSHA publishing. Author of the idea, editor-in-chief of the UPHA Made in Ukraine book project — an anthology of modern Ukrainian photography (BOOKSHA, 2021). Co-founder and curator of art projects at Ōagency Creative Studio. Initiator and researcher of the archive of modern photographic works for the Ukrainian Institute of Photography. In his artistic practice, Solop explores modern myth-making processes, habits, values ​​and prejudices imposed by society. In addition to photography, he works with collage, installation, sculpture and graphics.

Michael Kurtz is a writer and curator based in London, UK.

In his work, he is particularly interested in ways contemporary photographers experiment with photographic processes to engage critically with how we relate to the world through images. Kurtz is completing a Masters at Birkbeck’s History and Theory of Photography Research Centre and works as research assistant to Michael Peppiatt. He has previously worked in the photography archives at Four Corners Gallery, Waddesdon Manor, and the Pitt Rivers Museum.